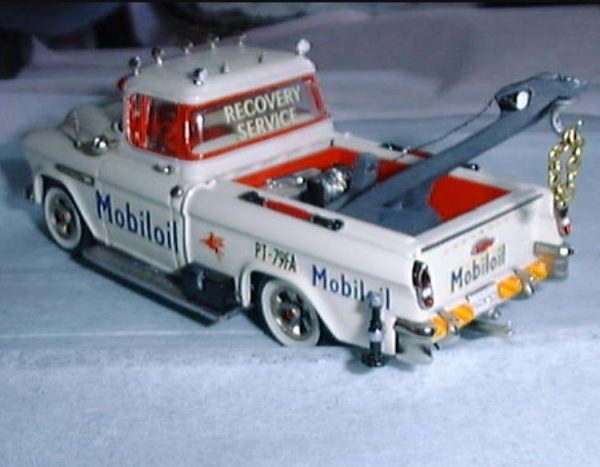 This model is just amazing, the detail is out of this world, it is in the Mobiloil livery tow truck and we have made this into a super model.

We have added chequered tread plate side steps with a tool box on either step each side, special 5 spoke low profile alloy wheels, rear support jacks for when loading or lifting equipment, it has got added bumper bars on the front for pushing vehicles, we have added a towing eye to the front bumper, it has got separate plastic head light lenses.

We have even gone as far as having Chevrolet decals made to go on the front and back.

We have added a rear-towing bracket and even gone as far as adding an electrical point.

We have put two spotlights on the end of the crane and have added 5 small lights to the top of the cab at the front and two small antennas on the roof along with two spotlights pointing into the bed.

There are also two large searchlights on either side of the truck on the door tops.

These models are all numbered and signed and have a date on the base when they were completed.

Each model takes over 400 hours to build.

Limited to 5 models only.